Although in the past those were rather overshadowed by the world-famous varieties, smaller winemakers are now trying to revive them and put them on the world wine map.

Austrian winemaker, Clotar Bouvier, in 1900, in the vineyards of Gornja Radgona discovered the white variety of ranina. It is projected that the variety is a cross between Pinot white and Green Silvaner. In Slovenian territory, ranina is the earliest variety. Its home is in Radgonske Gorice, where it is called simply special. It contains an extremely large amount of sugar and is suitable for special quality. It also produces an excellent must. The wine is rich, with a gentle acidity and rich with extract and alcohol. It has quite a unique bouquet and flavour.

Klarnica grows in the Vipava Valley. It was named after Mrs. Klara from Dornberk, because it is said that in the 16th century she planted it around her house as a protective boundary, so it is also called mejina (border). It is a vigorous variety that ripens late. In some places, they produce a sparkling wine from it.

Taste: The wine has a pleasant, rich body and, when in your mouth, it leaves your mouth with a long-lasting memory.

Ranfol’s home is in Styria and was once quite the popular variety, though now it is almost extinct. Ranfol is not an aromatic variety, so winemakers use it in such genres as Haložan, though at the same time it has lively acids. In addition, it grows abundantly and ripens late.

Vitovska grganija – this variety is found on the Italian and Slovenian Karst and is becoming very fashionable. It was first mentioned in 1844 by Matija Vrtovec, a known wine teacher and priest from Vipava. It is popular especially due to its relatively large cluster, a significant crop, unpretentious farming techniques and adaptation to agroecological conditions in Karst. In Karst, locals still use synonymous name 'Malvasia with the apostrophe'.

Taste: gentle because the wine is not rich in alcohol content, pleasantly sour

Zelen is one of the most recognizable wines of the Vipava Valley (Vipavska dolina). As its name tells us (zelena is green in Slovenian), in addition to the green colour it boasts herbal notes and a well-rounded acid, though it was not named for those characteristics but for its characteristically light-coloured tendrils of its young vines. Matija Vertovec (1844) wrote about the prevalence of the Zelen variety in upper Vipava valley and listed Zelen among white noble varieties with a specific noble spirit.

This is one of the oldest domesticated noble wine varieties in Slovenia. It is most prevalent in the Posavje wine region, even in Podravska here and there. The oldest vine of žametovka grown is in Lent, Maribor. The vine ripens late, bears many grapes and is highly resistant to pests. The variety is not picky of which soil it will root in, but is only picky about the position it will thrive in; it only thrives in a typical sunny position of a vineyard.

It is a delicate variety for which DNA testing has not otherwise explicitly confirmed that it is indeed an indigenous Slovenian variety. After all, the morphological properties of Pinela belongs to the Western European geographical ecological group of varieties - Proles occidentalis, which means that considering the properties of a similar variety it has always been grown in Western Europe in contrast to the varieties that are grown in the east and by the Black Sea. In Slovenia, we can find it only in the wine-growing district of Vipava and sub district of Vrhe in the Karst wine-growing region, where it is grown as a recommended variety. In our area, it has been known since 1932. The variety gives a very full wine that can accompany complex dishes. 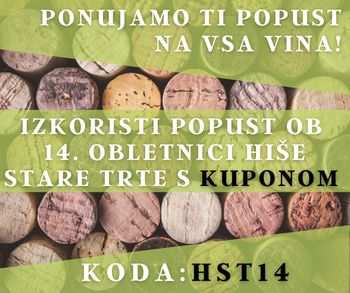