The Old Vine is resting; in favourable weather conditions, in the second half of the month, the cut can already be performed. According to tradition, we remember the name day of the patron saint of vines, St. Vincent (January 22nd), when we cut some vine shoots and place them in a vase in a warm place where they will sprout.

The cutting of the vine is carried out towards the end of the winter. The vine is trimmed in accordance with the knowledge that the best combination of efforts to maintain its sustainability and the expected average fertility is the one which assumes that the one-year-old branches are trimmed to two well-developed eyelets.  At the same time, we make sure to preserve the shoots that have grown out of old wood so that the next year we get new fertile saplings. The sprouts are carefully collected and given to a warbler, where they take care of the grafting of young vines, which are then given to the recipients as a gift.

The cutting of the vine is an important task. With annual pruning, we strongly interfere with its "life", namely we overthrow its natural evolution and the biological properties it has acquired during many millennia. The vine is naturally a climber, which in prehistoric times used to develop freely and reach massive proportions. The aim of cultivating the vine is to ensure a continuous and steady harvest as much as possible. Another thing, all the tools - scissors, a saw - must be disinfected beforehand. The wounds resulting from cuts that in the diameter exceed 2 cm must be coated with graft resin. In recent years, the cut is carried out in accordance with the recommendations of the lunar calendar of seeding.

The last Friday of February or the first Friday in March are traditionally reserved for the solemn event of pruning. Technically, the entire process is carried out previously, at the ceremony we only symbolically cut some of the previously intentionally left vine shoots in the central part of the oldest vine. The pruning of the vine can also be performed in March. It is also around this time that there is a long tradition of pruning in the Styrian vineyards, which was made to coincide with the name-day of Saint Joseph (March 19th). In the meantime, the crocuses start to bloom in the undergrowth and the annuals are sown which are expected to bloom under the vine in May and June.

We monitor the development of the vine and act if there is an occurrence of any pests.

In favourable years, there is a possibility of the vine flowering in mid-May. Before that, we performed the first thinning, which means we remove excess branches. Before flowering, we first spray the vine with an agent that inhibits the development of fungi of powdery mildew (lat. Unicula necator). Other diseases from the experience do not represent serious threats to the Old Vine.

Vines bloom at the temperature of 15 ° C, the optimum temperature for flowering and fertilization is between 25 and 35 ° C. For good fertilization, the humidity should not fall below 40%. In the case of excessive moisture, the flower caps open slowly, despite the favourable temperature. They often do not fall off, but remain in the ovaries, so that fertilization is prevented. Fertilization of the vine can be hampered by strong winds, low temperatures, excessiveness of the vine’s vigour and humid weather. When too many blooms are fertilized and the vine cannot feed them, they fell off. Shedding can also occur in the case of inadequate nutrition of the vine, but this phenomenon has not been recorded in the Old Vine’s case. We tie the rapidly growing branches because there is a danger of wind breaking them. In May, the intensive blossom undergrowth of the vine begins. Among the flowers included the ox-eye daisy, cornflower and poppy stand out. Those are honey plants that attract insects, especially bees and bumble bees. Flowering undergrowth is very attractive for visitors of the Vine and illustrates the natural circumstances in the vineyard. According to tradition, the name-day of Saint Urban (May 25th) is the day on which, depending on the time of the flowering of the vine, we can give approximate predictions about the quality of the wine harvest.

The latest recorded date of flowering in recent years was June 10th (2016). After flowering, a thinning of shoots is performed again. We remove those which do not have grape designs and are not important as potential vines for the coming year. In the second half of June comes the first dangerous period for a disease of powdery mildew. We carefully monitor and act if necessary, we spray. Disease can as well be prevented by removing all the excess leaves in the zone between the branches and the wall of the house as to allow the normal flow of air between the wall and the branches. This measure further reduces the possibility of diseases occurring. The lateral shoots are being removed, branches that have reached their final height are shortened. The vine is not fertilized. Its root system is so diversified that it enables it to have an optimal supply of all the nutrients it needs in a completely natural way. An analysis of vine leaves confirms whether the vine is fully receiving an optimal supply of food.

At the end of June or in early July we expose sticky boards as dictated by the rules of phytosanitary services and carry out spraying against the American grapevine leafhopper (lat. Scaphoideus titanus). That way we prevent the development of a dangerous and incurable viral disease of the vine - Gold grapevine yellows (lat. Flavescence dorée).

Again, we carry out thinning, we remove the lateral shoots (by the first node) and shorten those branches, which have reached the height of the upper edge of the support trellis. We tie shoots with raffia. The common name for this task is - the green labour. The work includes the thinning of the shoots, removing leaves, secondary shoots, deploying and depriving of juveniles, removing growing tips and, if necessary, thinning of grapes. This latter measure may be considered particularly helpful for the elderly vine, where we want fine, well-developed and thoroughly stained clusters. In the second half of July, as a rule, we carry out the last spraying.

In summer, the occurrence of hail is frequent. Past experience shows that clouds bearing hail approach Maribor mainly from the northwest side. The vine is on the side which is protected and the hail does not cause major damage. If hail is falling vertically the vine is partially protected by the projecting roof of the house. That is why in recent years, there were no injuries to the grapes, only damage to the leaves, which does not represent a serious threat. As a preventive measure, we keep all the leaves in the zone of the grapes. Its role is to protect the grapes from possible hail and - this has been recently confirmed during the especially very hot years - shading the grapes against the strong sunshine.

In the second half of July, we mow the undergrowth of the vine, which had stopped blooming in the meantime. The lateral shoots are being removed, we shorten the branches that have reached their final height.

During the first 10 days of August, the Old Vine’s grapes slowly begin to colour.  It obtains a bluish layer and slowly passes into an intensive velvety-blue. The lateral shoots are removed and we cut the branches that have reached their final height. After the 20th of August, we carry out the first of three measurements of sugar content. This is how we follow the ripening of the grapes. On the last Friday in August, in front of the Old Vine House, we set up a wind rattle and announce the series of events included in the Old Vine Festival that extends from the harvest until St. Martin's Day.

We perform the last thinning and shortening of shoots. A week before the harvest, we remove most of the leaves from the area where the grapes are ripening.  The vine shows us the luxury of its produce. This is the time in which it is most eye-catching and beautiful to observe and photograph. We mow the undergrowth once again and prepare the vine for the harvest.

On the first Sunday in October is the grape harvest of the Old Vine. For harvesting, we use only clean containers so that they do not affect the grapes or grape juice. The grape pickers first pick the grapes from the Old Vine and then from its two descendants. The grapes are ground, experts from the Agroforestry Institute conduct the measurement of sugar content, then the mash is transported to the Faculty of Agriculture and Life Sciences. Fermentation and further treatment of the wine up until bottling takes place in Meranovo above Limbuš, on the former estate of Archduke Johann von Habsburg. The winemaker of the annual harvest is an associate of the faculty MA Janez Valdhuber.

The winemaker communicates the final data on the quality and quantity of the grape juice that is squeezed after the maceration of the mash and later on the volume of wine. At the time of harvest, grape pickers next to the vines scatter well-rotted manure, but this is merely a symbolic act - the memory of the once plentiful fertilization of vineyards after the harvest. The Old Vine, due to its diversified root system, is optimally provided with all the nutrients it needs so it does not need to be fertilized.

Wine from the oldest vine is used in the christening of the must, which is the context for a major event at Maribor’s Trg Leona Štuklja Square and is traditionally held on St. Martin's Day (November 11th). Depending on weather conditions, the vine is coloured in a reddish-yellow pastel colour and becomes very attractive for observation and photography. As a rule, after harvesting, we leave one cluster on the vine, so visitors can know what it's crop looks like. If necessary, we mow undergrowth once again and prepare it for a new growing season.

The Old Vine is resting.

For all her friends and fans, we release a calendar, which among other things also brings the three most important dates of her life in the upcoming year - the date of the pruning, the date of the setting of the wind rattle, and the harvest with the beginning of the annual Old Vine Festival. 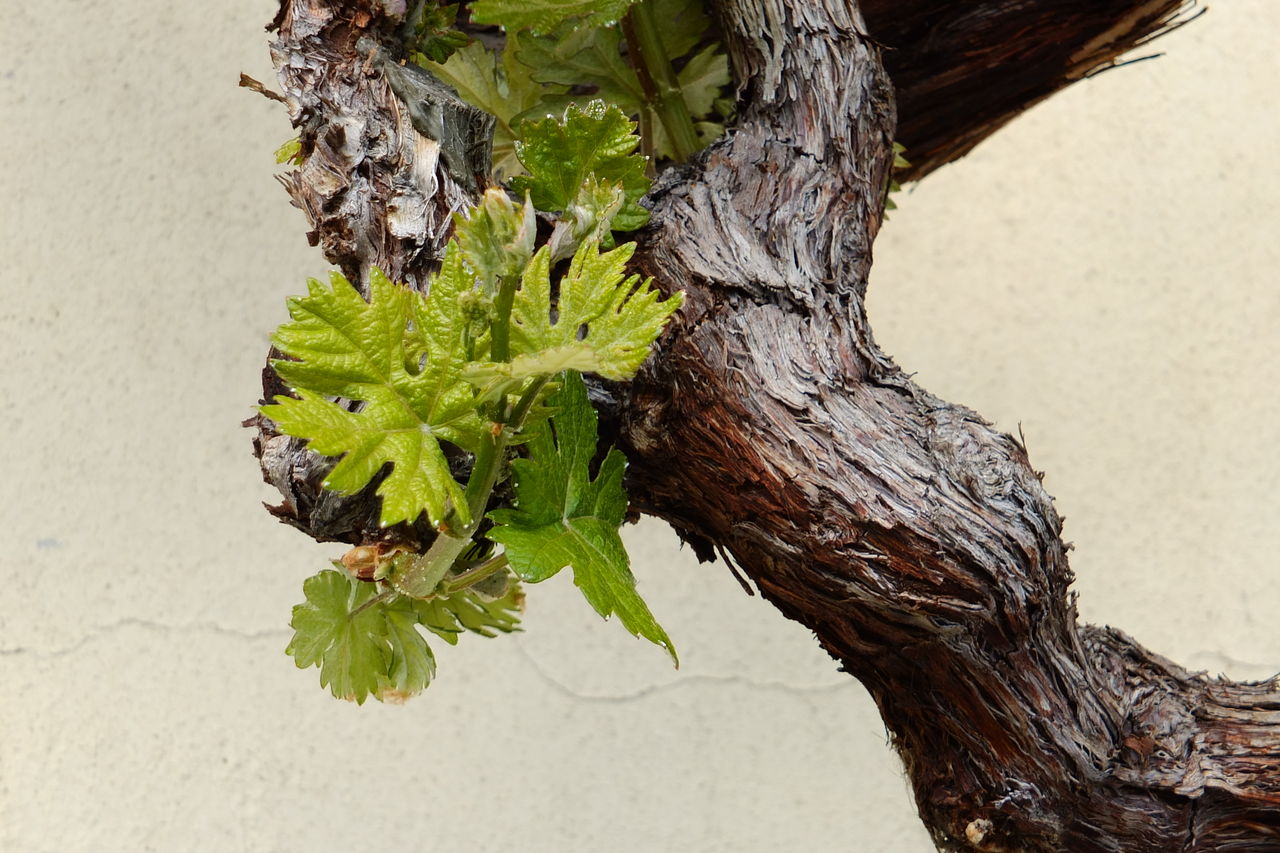 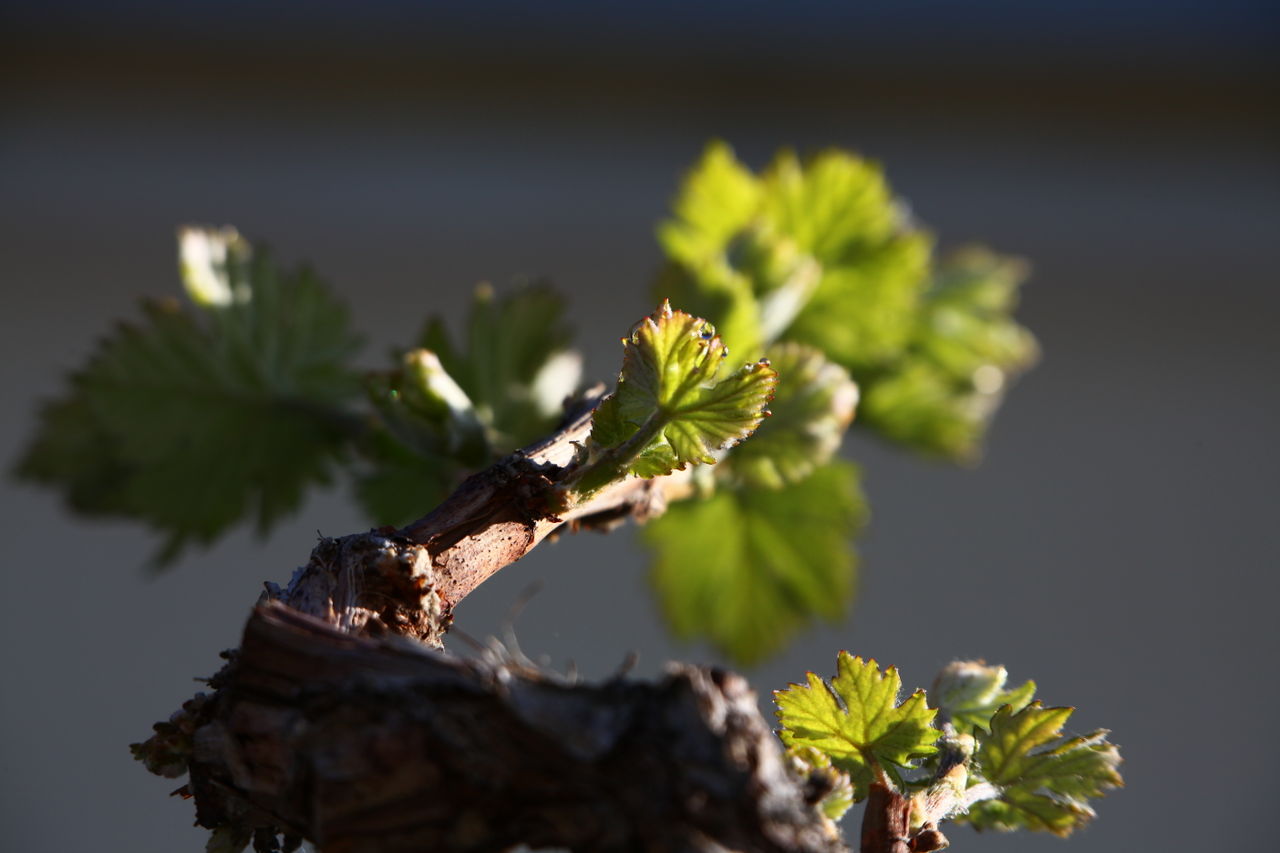 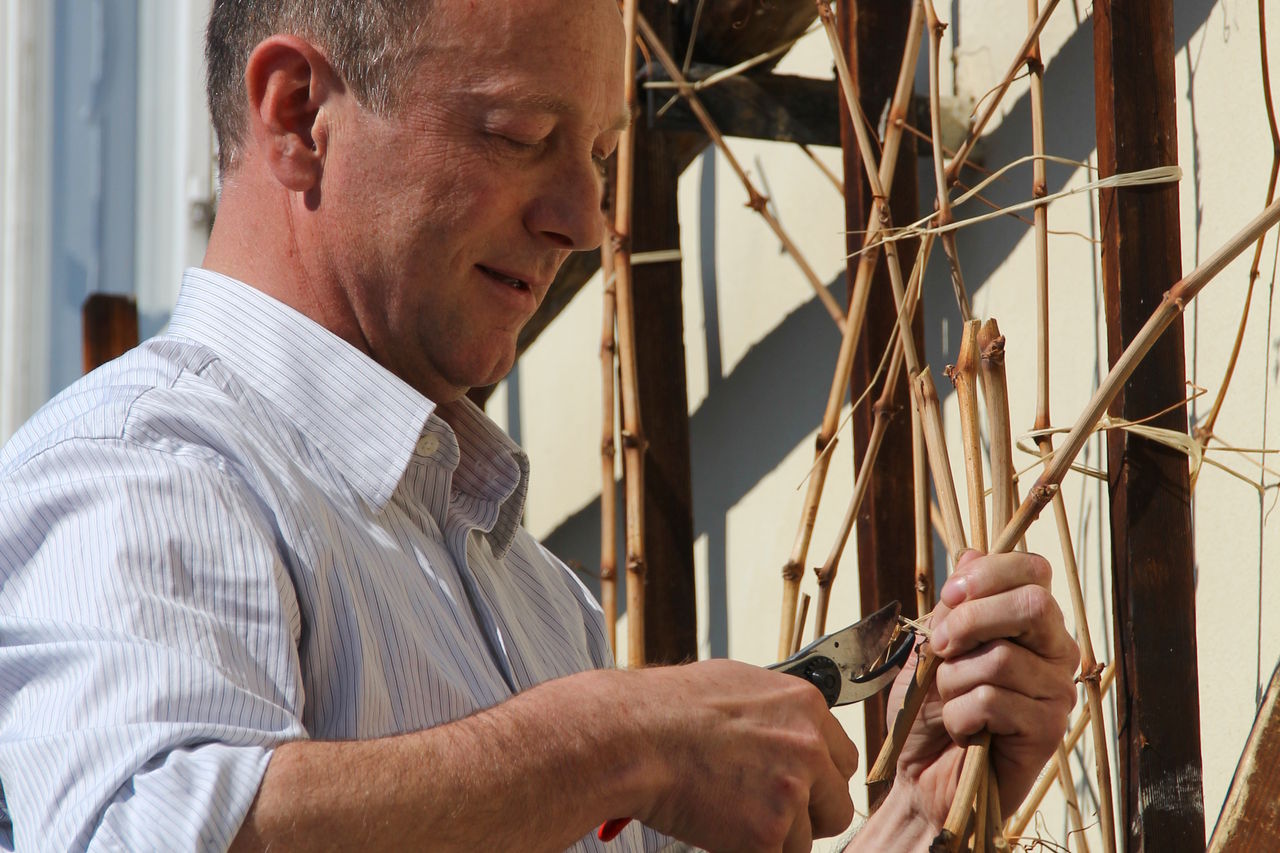 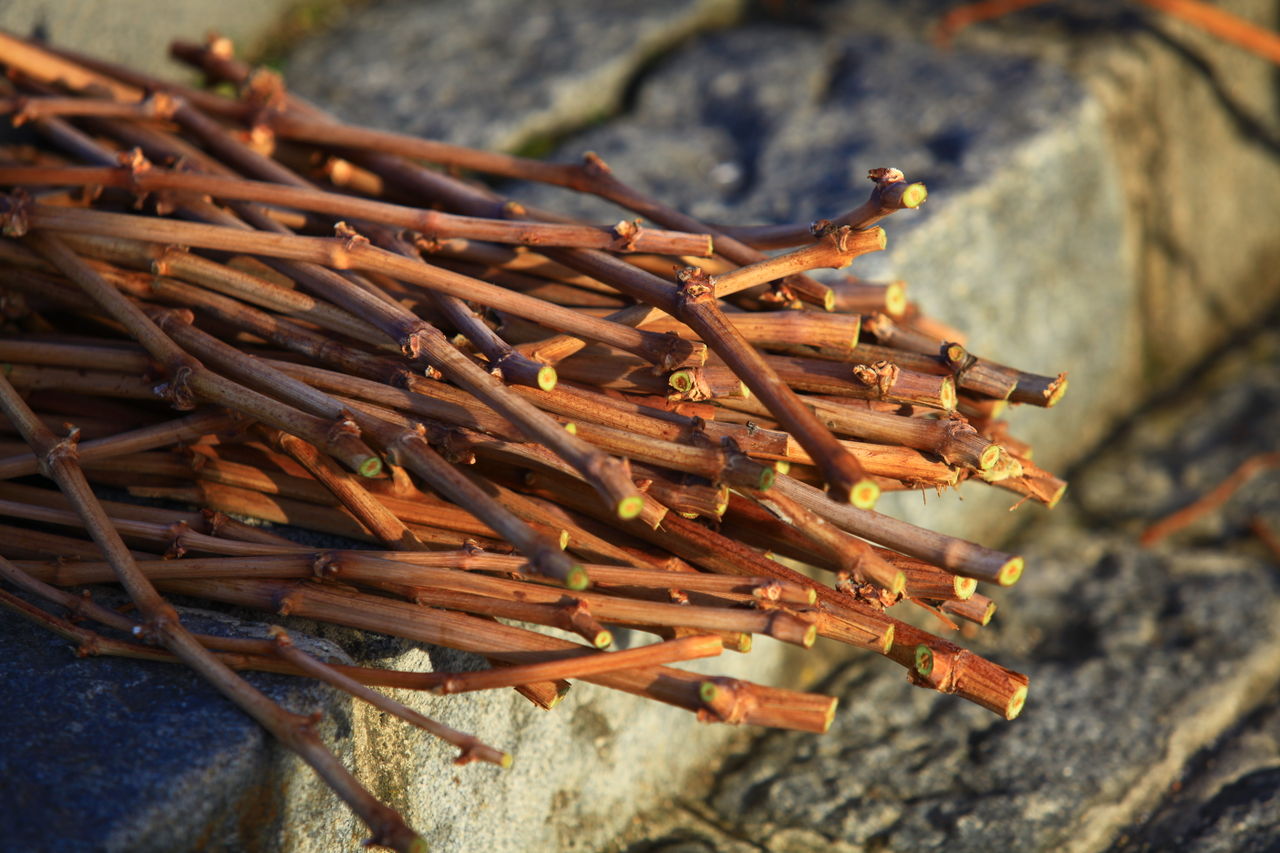 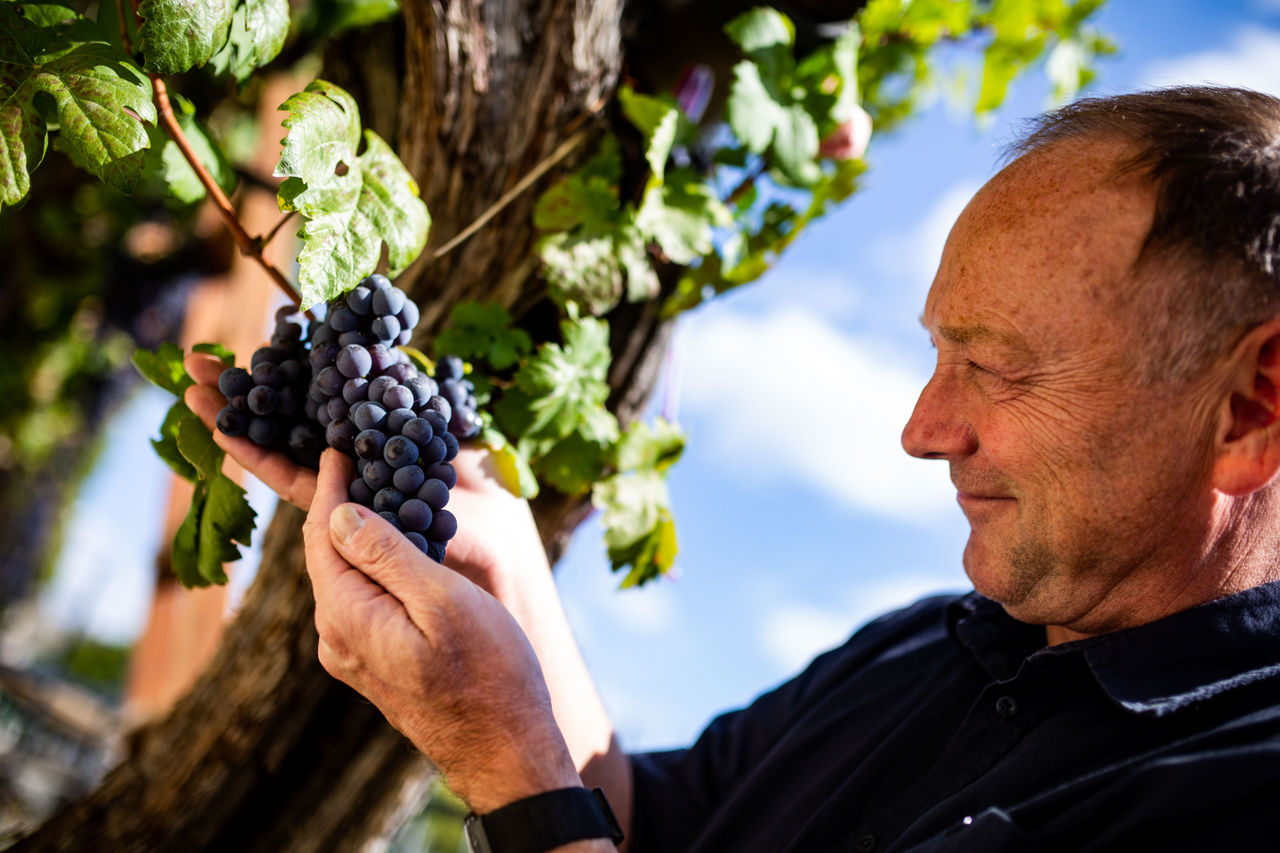